My friends would politely label or name me as an anomaly . I am many different things and capable of having multiple enthusiasms about disparate issues, causes and substances.
One of these many things is beverage alcohol in it’s many splendid and multifarious forms.
Some of my chief enthusiasms for that subtle poison for without which life would become rapidly unbearable are for whisk(e)y, gin, brandies and eau de vies. But I also have dedicated a lot of time and attention to vodka. By last count I have almost 200 of them of every conceivable type from all over the world. They all are interesting (some if only in a bad way or humorous way), different and worthwhile in some way. And yes they even have a sense of terrior , a Russian vodka from the Yaroslavl area is as distinctive from an Estonian vodka as an Islay scotch is from a Highland,
It’s just more subtle and in a narrower range of difference. I have Russian friends who can not only tell you what distillery but what shift made the vodka at Russian distilleries. It’s a matter of attention to detail. Example:
A cola drink has roughly 50 + flavor notes to it. A lemon /lime clear soda (7 Up, Sprite etc.,) has only about 7 – but of course you can tell 7 UP from Sprite . Same holds for mineral water – the differences between most are quite remarkable , Gerolsteiner tastes nothing like Perrier and so forth.
Vodka can and does have unique differences that make it interesting, subtle yes, but interesting.
As to drinks think of it as a blending or catalyst agent. It is absolutely necessary for the mouthfeel, weight and mixing of some ingredients to make a successful cocktail, but many were you don’t necessarily want a extra taste(s). If one were to use only alcohol containing eau de vies in a drink rather than juices or other non alcoholic liquids you would be either making very small drinks or a rapidly mind numbing cocktail. Vodka does serve a vital purpose as something to facilitate blending of ingredients and to give a feel and taste to a drink.
Also it serves a very useful function which I rapidly learned to appreciate while socializing with my Russian friends.
When you are eating a Russian smorgasbord type of meal with friends there are a huge variety of heavy, protein rich, foods that each would cling like grim death to taste-buds interfering greatly with the appreciation of a new item. 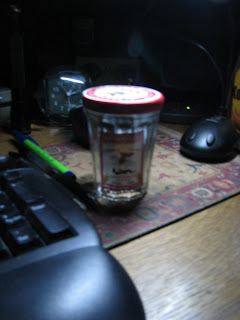 The only way to clear your palate for the next course (O.K outside of slices of cucumbers , but what fun is that?) is to do a Russian Shot of Vodka – this is not some 1 oz shot or even a 1 1/2 oz jigger but a 4 finger 100 ml (that’s 3.38 oz minimum) of vodka to clear and rinse the palate.
Above is a prefilled Russian shot glass – tear off top as you won’t need to reseal it (they always unscrew a cap of a liter bottle and throw it over their shoulder too – but that is another story).
Such pieces of glassware -and the vodka to fill- it is an indispensable part of a proper Russian gathering both for the enjoyment of the food, conviviality and comradeship that will break out.
Using any other form of alcohol just does not work, nothing clears a palate like a large shot of clear cold mineraly vodka – leaving the palate refreshed and ready for more. Another point is hangovers – if you are doing things properly and having many toasts , you need something exceedingly clean of any other chemical compounds (the ones that lend color,taste, and mouthfeel in other alcohols) because you are going to do a lot of it – you just can’t do them in the same quantities.
As my favorite drink for vodka (or at least the way to drink it) many times it is something my many Russian friends ( Paratroopers, ex Partisans, Chekists,) taught me- just a glass of pure vodka at about 40 degrees Fahrenheit (too cold and it loses too much taste) in a Russian shot glass you clutch it in your hand and bump fists with your friends so you don’t alert anyone – (Army Officers, Fascist Invaders of the Motherland, or whoever ) that you are drinking . You are simultaneously celebrating life, relaxing, and getting one over on authority – what could be better?

2 Responses to In Praise of Vodka