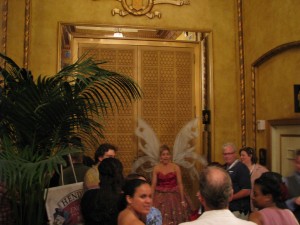 Eventually ( as the opening was running late) we were all greeted by Charlotte Voisey – Hendricks Gin Ambassador who, even more so than usual , (given the costume and circumstances), looked like a slumming angel .

Charlotte , who always is a good sport about such things, wore her costume with grace and poise, greeting all of the guests into the darkly lit room beyond the golden doors.

I ran into David Suro ( Of Tequilas Restaurant in Philadelphia and Siembra Azul Tequila) and Dr Rodolfo Fernandez (Noted expert on all things Agave and more) at the burlesque show – Rodolfo had a great line as we were watching the whole spectacle – “We don’t have such things in the third world ” a pause then, “But we do have American TV which can be similar”

The burlesque show itself was, at turns, amusing and scary, depending on the acts – some of which reminded me of a old saying about prostitutes in Paris but I digress as usual.

Following the Hendricks party I caught a ride with David and Rodolfo to Herbsaint down the street. Bottles of Mezcal somehow appeared from out of a briefcase someone else brought and we are drinking it from the bottle on the sidewalk at the cafe. After getting some more refreshments and a desultory conversation or two we went back to the Monteleone Carousel till it closed down for the night. After that it was off down Royal and somehow ending up at the Erin Rose around 4 AM or so.

The place was unbelievably packed and people of every possible type, persuasion and state of sobriety were there,a major player in the business was there , hooting,raving falling over and having a good time, locals, tales goers of all stripes, it looked like the Meet Cafe from Naked Lunch, some many people of so many different types and enthusiasms were packed in there it was hard to tell who was doing what to me , if they were just being friendly,something more or just trying to let someone else go by. It really didn’t matter really, everyone was getting along just fine. We bumped into numerous old friends, made new ones and finally, regretfully, headed down to the Alibi to decompress a bit and await the dawn with a few of a die hard friends.