Good, cheap and available – a probably on clearance now

Notes:  Classified as an Aperitif but also used as a mixer like vermouth. Originally sold in 1846 in one of the many attempts to get French Foreign Legion Soldiers (or any other soldiers) to drink their medicine, in this case, quinine – for malaria and sundry other fevers – and as many others have the result entered the mainstream society long after the original purpose (other attempts include grog, absinthe, gin and tonics, and a host of Italian Amaros).

Other versions are a Blanc (white) and gold (have not seen in the U.S.).Appearance: Tawny red/gold color, thick edgeline and some legs forming after a bit.

First Impression: Port or sherry like in beginning with dry herbs starting to creep in, rosemary, fennel, star anise, orange, angelica, orris root, among others. Think raisins with herbs. 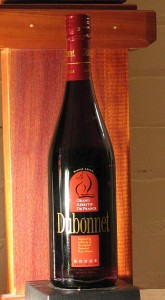 Taste: More like a Port or sweet sherry than anything else, with the herbs adding depth and complexity, anise (?) rosemary, fennel, angelica, wood and spice aromatics. The finish is long with slightly astringent notes at the end. A bit muddied compared to the new version but less sweet and plummy.

Drinks: Also good for a number of other drinks.

Bottle: Very dark green glass with a simple but tasteful label in an almost Napoleonic fashion. Dark color and thickness of glass protect the contents from sunlight.

Other: Dubonnet is an aromatized wine, and as such it will spoil. Buy a 375 ml (1/2 bottle) unless you use it a lot. Refrigerate after opening and get a new bottle after 2 months or so- you and your guests will appreciate the difference!

Final Thoughts: This version is being closed out. Grab it if you like it, or wait for the new iteration.

A quick-loading web page with lots of cocktail ideas and much less on its actual production.