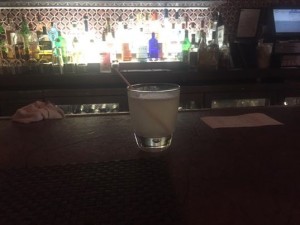 I just wanted to let our readers know about my personal experience/quest for a Daiquiri at John F. Kennedy Airport – New York Cities major airport.

Being in transit between San Jose California to Rochester, New York, returning from a press trip to Lost Spirits Distillery (and to witness their rapid spirit aging reactor Theta 1, more on that later), around 8:45 or so I started my quest for a Daiquiri – to me simple quest, It is on of the more basic cocktails one can make or ask for and, well executed, a wonderful cocktail.
Not at JFK – that’s all …. I went from the Airspace private lounge (the snazziest bar in the airport, to Blue, and all the restaurants and bars and was turned down flat – they could not do it, did not have the ingredients, or had never heard of such a thing and/or did not want to mix anything that was not in their computerized billing system, a seemingly futile quest until…

She was in a smaller Spanish themed restaurant bar with a modest and much smaller selection of spirits than most of the others, I explained my quest to her and my desire to Honor Sasha Petraske by having one. She had heard of Daiquiris but thought they required a blender, “No. I said, not the classic ones.”

“How do I make it?, I would like to learn she said ” I showed her the IBA standard recipe on Wikipedia

“It was so simple she said, I would love to learn more.”

We discussed other cocktails, and how simple they can be and how delicious they can be with good ingredients and some attention to detail, Sasha and bartending, and where to find books and online resources to learn more and pursue her art. She had caught the bug, you could see it in her eyes and her enthusiasm to learn.

I personally think it was one of the best ways to honor Sasha Petraske and the profession of bartending by welcoming another bartender into the conspiracy and teaching them the joy of learning more about the craft.

It was not only a wonderful Daiquiri, but a wonderful experience for me to see someone take such joy in learning something and turning them on to the world of classic bartending and cocktails .

The following is our original article for those who might have missed it:

Sasha Petraske, one of the leading lights in bringing back Classic Cocktails and setting the standards for excellence and service has died. Only 42 and recently married Sasha left us far too early.

The founder of the famous bars both named Milk and Honey in New York City and London. The NYC bar was a place you had to know how to find – it was camouflaged behind an abandoned business facade, but was a Mecca for cocktail enthusiasts and set the standard for both cocktails and execution of service. Sasha was a personal friend and will be sorely missed.

The Milk and Honey group sent out this notice that I wish to pass on to cocktail aficionados everywhere:

On behalf of the entire Milk & Honey family, we invite you to join us in a tribute to our dear friend, Sasha Petraske.

On Monday, August 31st, from 9:00 pm ~ 10:00 pm, we will be celebrating Sasha’s memory with an hour of mixing and toasting with Daiquiris. This classic was one of his favorites. Why the hour of 9pm? It was the hour that Milk & Honey opened its doors each evening.

Wherever you may be in the world at 9:00 pm on August 31st, and whichever time zone you are in, please join us with a Daiquiri and a toast to his blessed memory.

We know in our hearts that he would appreciate this.”

For photos and a direct link please go to : http://www.ravenwood.org/sasha/